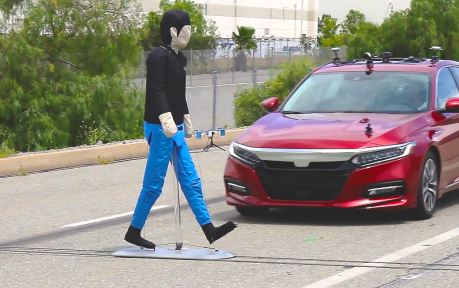 So says the American Automobile Association in an alarming study, and by all accounts an exhausting one. It was done in partnership with the Automobile Club of Southern California’s Automotive Research Center.

On average, nearly 6000 pedestrians lose their lives in the U.S. each year, says the AAA, accounting for 16% of all traffic deaths, a percentage that has steadily grown since 2010.

“The research reveals that automatic emergency braking systems with pedestrian detection perform inconsistently, and proved to be completely ineffective at night,” according to the AAA. “An alarming result, considering 75% of pedestrian fatalities occur after dark. The systems were also challenged by real-world situations, like a vehicle turning right into the path of an adult. AAA’s testing found that in this simulated scenario, the systems did not react at all, colliding with the adult pedestrian target every time.”

Now, bear in mind that the testing was done using four cars, not trucks. But I believe the technology – part of all advanced driver-assistance systems — used in both small and large vehicles is at least very similar, maybe exactly the same. And more than once I’ve heard truck engineering types say that pedestrian detection was proving to be a challenge.

FOUR TEST VEHICLES WERE USED in the AAA testing – a 2019 Chevy Malibu, 2019 Honda Accord, 2019 Tesla Model 3, and 2019 Toyota Camry. Each car was outfitted using industry-standard instrumentation, sensors, and cameras to capture vehicle dynamics, position data, and visual notifications from the pedestrian detection system. Three simulated pedestrian targets were used, each one outfitted with industry-standard instrumentation to time movement as well as to receive position, speed, and acceleration from the dynamic target. Complete methodology can be found in the full research report, available free of charge here. It makes for interesting reading. You can watch a video here.

The AAA research reveals that automatic emergency braking systems with pedestrian detection perform inconsistently, and proved to be completely ineffective at night

Testing used simulated pedestrian targets for the following scenarios:
An adult crossing in front of a vehicle traveling at both 20 and 30 mph during the day and 25 mph at night.
A child darting out from between two parked cars in front of a vehicle traveling at 20 and 30 mph.
A vehicle turning right onto an adjacent road with an adult crossing at the same time.
Two adults standing along the side of the road with their backs to traffic, with a vehicle approaching at 20 and 30 mph.
Overall, the systems performed best in the instance of the adult crossing in front of a vehicle traveling at 20 mph during the day. In this case, the systems avoided a collision 40% of the time. But, at the higher speed of 30 mph, most systems failed to avoid a collision with the simulated pedestrian target. The other scenarios proved to be more challenging:

Stay up to date